Do You Have Influenza Symptoms? What Exactly is Flu? Throughout the winter, there is always a possibility of picking up a virus and having influenza symptoms. It may not necessarily mean that you have caught the Flu, but it is useful to know the difference in symptoms, to be able to treat it accordingly. A bad cold can masquerade as the Flu, just as another, more serious illness could be wrongly diagnosed as the Flu. A checklist of symptoms can help to ease your mind and keep you vigilant to any other possibilities.

The correct name for Flu is Influenza. There are 3 types of Flu – A, B and C. A and B tend to be the most usual types of Flu, which are transmitted between people throughout the winter months. Different strains can cause different influenza symptoms, the most common being:

There are also other viruses which can cause similar symptoms, but it may not be the Flu. Influenza symptoms tend to be at their worst on days 1-2, then steadily improve over the week. After 7 days, the virus should have cleared the body, although symptoms such as a runny nose and cough may continue for a while longer. 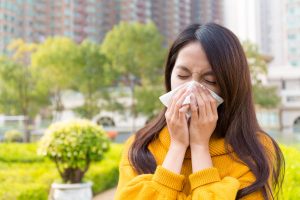 How Do We Catch Flu?

Simply by touching a surface where the virus has landed can be enough to pick up the Flu. This is why it is imperative to ensure that all working surfaces (kitchen worktops, desks, tables) need to be thoroughly cleaned during an outbreak. Of course, the other way to contract a virus is to catch it off another person. Being around someone who is coughing and sneezing is a surefire way to become ill. Through the droplets in saliva and mucus, the virus is able to attach itself to others easily, if the affected person is not covering their mouth or nose.

When It’s Not Flu

Instead of putting our illness down to a general ‘Flu bug’, we should always be aware that it may be something other than what we diagnose ourselves. Illnesses such as pneumonia, malaria and meningitis can be the cause of illness, but can have similar symptoms to Flu when starting to feel unwell. Should any of the following become apparent, contact a doctor immediately:

If a person has on-going health issues, then complications from contracting the Flu are a possibility. Be aware of any symptoms that become worse over a few days, especially shortness of breath, worsening cough, chest pain or a temperature that won’t go away. Ensure that the patient gets medical help immediately.

As with most viruses, the best thing you can do for yourself is to stay in bed and rest. For the aches, pains and temperature, take paracetamol or ibuprofen and make sure you drink plenty of fluids to help flush out the virus and to prevent dehydration. Stay away from other people! If that means staying off work, then your colleagues will only thank you. By continuing your normal routine, a virus can be spread at a rate of knots through a workplace or school, keep it to yourself until you’re no longer infectious.

The Flu vaccine is offered to those most at risk of getting complications should they contract the Flu. Children, the elderly and those with low immunity will get the most benefit from the Flu shot. It doesn’t offer long-term protection or cure the virus, but it can minimise symptoms and prevent other, more serious illnesses from developing.

Flu is a virus, so antibiotics will not help with influenza symptoms. They can help with a bacterial infection or an infection, which has developed because of the virus, but won’t kill the virus itself.